hen Indian Prime Minister Narendra Modi promised to bring his Gujarat Model to the rest of the country, everyone thought he meant the pro-growth reforms that had allegedly done wonders for his home state's economy. But recent events suggest that the real Gujarat Model that Modi had in mind was something else entirely: a government that looks the other way as private militants violently attack disfavored groups. It's a model that infamously resulted in the slaughter of more than 1,000 men, women, and children, mostly Muslims, over the course of a few days in 2002 when Modi was the state's chief minister. 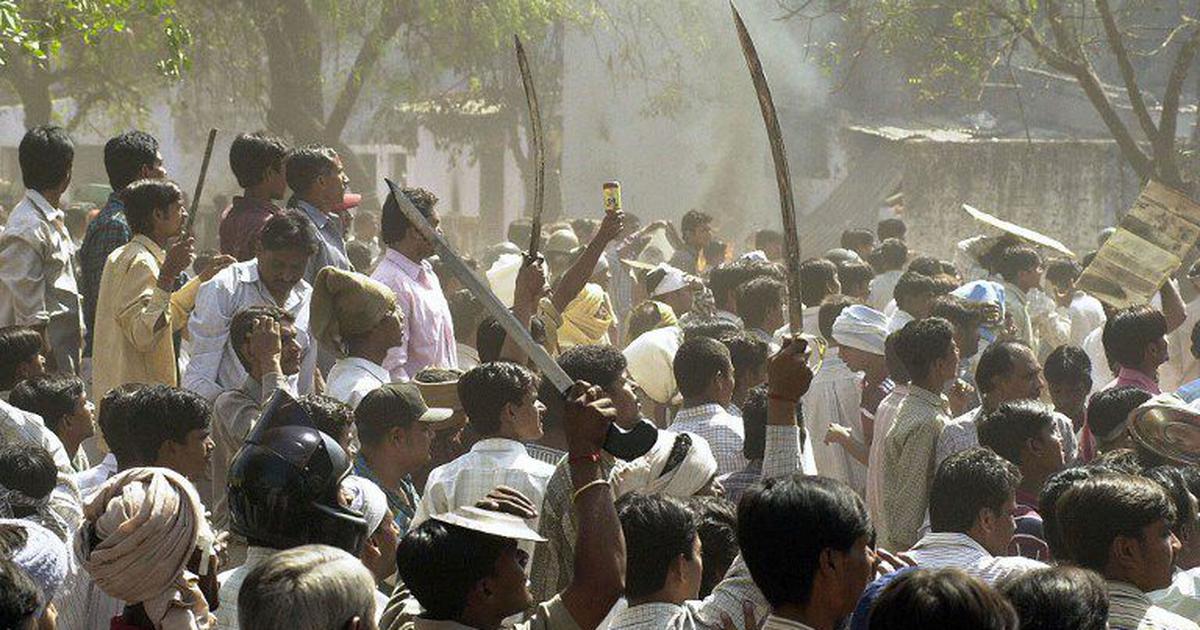 Now Modi has done a mini-reenactment at Jawaharlal Nehru University (JNU), a prestigious college in the heart of New Delhi where the opposition has long irritated him. This is no doubt a warning shot to the growing youth resistance against his "papers, please" citizenship law. Here's what happened at JNU: On Sunday evening, January 5, 40 to 50 hoodlums, mostly men but also a few women, faces partially wrapped in scarfs, armed with clubs, iron rods, and sledgehammers, stormed the campus. Eyewitness accounts and video footage suggest that several of these people were members of Akhil Bharatiya Vidyarthi Parishad (ABVP), a student union associated with Modi's party. They approached a group of students protesting a sudden, massive fee hike and began thrashing them. They bloodied the student president, Aishe Ghosh, and many others. Then, chanting that the students were traitors who deserve to be shot for opposing the administration, the attackers barged into dorm rooms and went on a rampage, taking care to spare rooms that sported ABVP posters. Muslim students were of course fair game. And so was a blind Hindu student, a Sanskrit scholar and a student of Hinduism no less, whose wall sported a picture of Dr. B.R. Ambedkar, India's reformist founding father. (Ambedkar has fallen from grace in pro-Modi circles because he was a vigorous opponent of the caste system and other regressive Hindu practices and because his ideas are fueling the constitutional case against Modi's Hindu nationalism.) 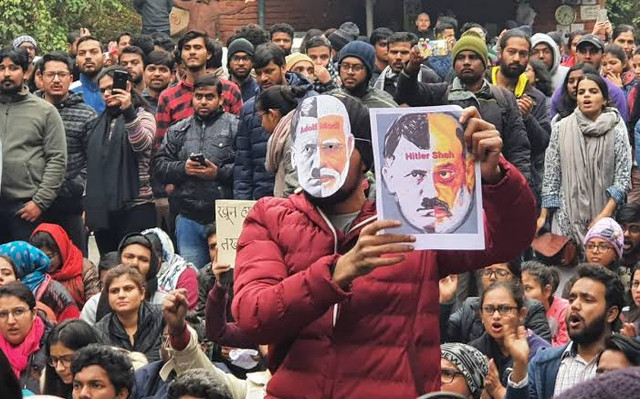 JNU's vice-chancellor, who is appointed by the central government, failed to mobilize campus security to stop the mayhem. The Delhi police, which is under the command of the Modi government rather than local authorities, ignored the frantic calls of students for over an hour. A veritable battalion of cops was standing right outside the campus gates, but not a single one went in to stop the attack. The cops even stood by as ambulances were vandalized right in front of them. Modi hasn't said a word condemning the violence at JNU. No assailant has been charged or arrested. The police claim they're zeroing in on some suspects, but—judging by how they have handled cow vigilantes lynching Muslims suspected of consuming beef—you shouldn't be surprised if anyone arrested faces no more than a slap on the wrist. At the exact same time that the JNU students were getting bashed, the cops were preparing a rap sheet against some of them, including Ghosh, for allegedly vandalizing university computer servers the day before to stop students from registering. Ghosh denies the allegation. The ABVP circulated a video—retweeted by the vice chancellor—that purported to show that the Sunday violence was triggered by a prior episode when a "lefty student" punched an ABVP member. But it turned out to be the opposite: An ABVP supporter appears to have been attacking a "lefty student." All of this—law enforcement standing by as private militants allied with the ruling party go on a violent spree, criminalizing the victims, spreading disinformation to confuse the public—was Modi's modus operandi in Gujarat. And the ominous parallels with that grisly episode don't stop there. The Gujarat carnage was preceded by a long vilification campaign against Muslims, a strategy he Modi has been replicating in miniature against the university. The prime minister has long castigated JNU students and faculty as communists and traitors who want to break up the country—never mind that last year's Nobel laureate in economics along with two of Modi's own cabinet ministers hail from the university. Modi's home minister and right-hand man, Amit Shah, known for his brass knuckles politics, has repeatedly said the university's "tukde tukde gang"—meaning the gang that wants to dismember India piece by piece—needs to be "taught a lesson." Modi popularized this moniker a few years ago when some of JNU's firebrand student leaders harshly protested the abrupt hanging of a Muslim man who had allegedly attacked the Indian parliament. Such statements signaled to Modi and Shah's most extreme supporters that they wanted the university targeted, without having to bother with actually giving orders to law enforcement authorities. Not that Modi's crew is shy about issuing orders when they think it's necessary. A few weeks ago, cops appeared to vandalize Jamia Millia University, a Muslim institution in New Delhi. Modi's comrade, Yogi Adityanath, the chief minister of Uttar Pradesh, went even further. His police showed up at Aligarh Muslim University and roughed up students protesting Modi's faith-cleansing policies that would strip an untold number of Indian Muslims of citizenship. Over 60 students were injured, three critically. Several students have just disappeared. A Muslim female journalist who was covering a protest in nearby Lucknow was arrested and allegedly assaulted by police. Such tactics are backfiring. The anti-government protests, especially on college campuses, are spreading. Students at many elite colleges have gone on strike and are holding candlelight vigils to protest the events at JNU and AMU as well as Modi's citizenship law. 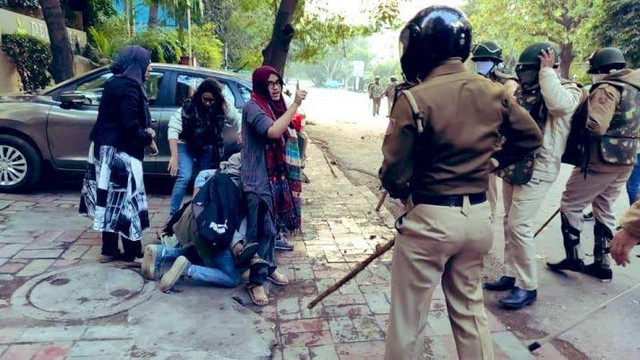 A normal politician would back off in the face of such public opposition and extend an olive branch, especially given how quickly Modi's carefully cultivated squeaky-clean image is getting trashed in India and abroad. But Modi and Shah are doubling down. Previously, they had dubbed secularists defending religious freedom as "Muslim appeasers." Now even moderate free-market conservatives or middle-of-the-road liberals expressing concern over the direction of the country are being branded as the radical left, according to Madhvan Narayanan, a veteran Indian journalist. Why is Modi doing this? What's his endgame? Many fear he is deliberately baiting protesters and fomenting widespread unrest to build an excuse to cancel elections in Delhi next month and put the city under the president's rule. His party is expected to lose handily, just as it has done in other state elections in recent months, thanks to the growing dismay over his assaults on citizenship. There is even speculation that he is preparing to suspend India's constitution and declare an emergency, just as Indian Prime Minister Indira Gandhi notoriously did in 1975. That may or may not be the case. But one open question about Modi always has been whether he was pushing an extreme Hindu nationalist agenda to gain power or pursuing power to push his agenda. His growing enemies list—and the private and state violence he will apparently deploy against those on it—suggests that the former might be the case. This means no one outside of Modi's band of merry brothers is safe in India anymore. All of India is Gujarat now. Dissent is out. Violence is in. As one poster at a protest noted: "First AMU. Then JNU. Next You."

It is the first time since 2004, that India is in this list! The fascist dictatorial regime mindset of Hitler of India(modi) is hurting India in an unprecedented way!